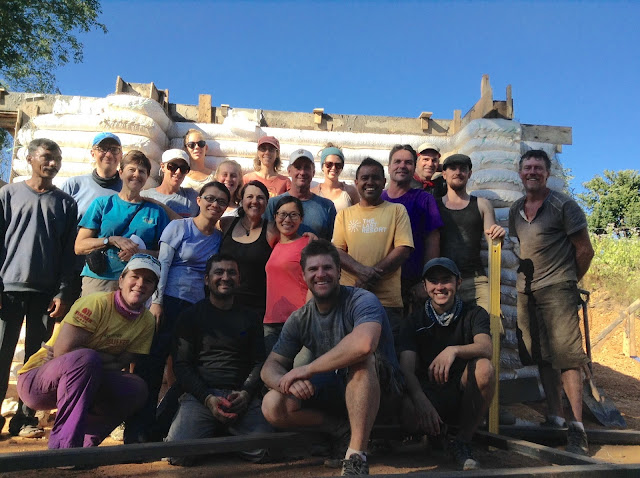 We are starting to feel at home here in Sangachok. Our work site is situated on the side of the Friendship Highway, the name given the road as the trade route between China and Nepal. We are familiar with the hazards on the road as we used to use back it in the 90's to access Everest's north side in Tibet.  However it's become much quieter post earth quake as China has since decided they won't rebuild the road this time because of the forever landslide conditions here. There's a deep canyon that drops off into the raging Sun Koshi river below. It's just too dangerous to try and keep it open and instead rumour has it that China has turned the border town between Kodari and Zhangmu into a military post.

In Nepal there is always something going on. There was a bit of a protest yesterday because a woman had been hit and killed on the road. It brought back memories of the same thing happening in 1991 as we were making our way to Everest on this section of the road when a woman was killed.

Our team seems to have rockstar status here in the village thanks to all the good work Durga and
Fionna have put forth building schools offering quality rural education. We are greeted each morning with warm "namastes" from families as we make our way to breakfast. There is a family that has opened up their home to feed the crew that has saved extra work having to do that. A mom and dad and their two children. They will lose one of their helpers tomorrow when the eldest boy leaves for school.

School starts tomorrow after a 10 day break during the Tihar festival. The pressure will be on us to get this roof on the school. Tim was having a bit trouble with the welding because the power stream is so minimal and the welder has seen it's days.  Durga returns today with a generator and new welding machine so now he can get the welding done. The water supply runs at a trickle making gathering enough to make cement another problem. It's not easy building in Nepal with resource challenges, but you just keep going making it work.

Today the team made cement by shovel to build the header seen in the photo, and put the floor down on the teachers school. Gerry is in charge of the septic project and others are wrapping the building with chicken wire and plastering and other associated projects to get the building complete.

We are joined with some other young workers from around the world making a total of 18 of us here. Others were here before us making the walls with the earth bags. Tonight they enjoyed a campfire as some are leaving us in the morning.  There is so much to do and it's likely we'll be back again next year, and hopefully we'll be bringing friends who couldn't make it this year. It's grunt work so muscles and stamina are greatly appreciated.

On that note, we call it a day.

Many thanks to Wanda for the photo uploads. 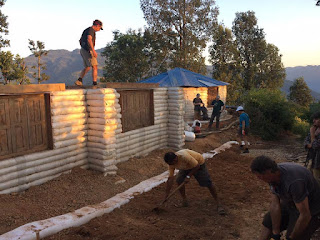 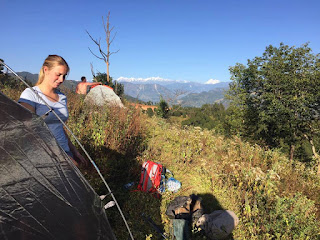