There are so many unresolved issues in Nepal right now. The current fuel blockade being the most
serious at hand post quake. Rebuild projects have come to a grinding halt and the government has not spent the 4.4 billion in aid money, and winter is coming. Health, shelter, water, electricity, food and the overall morale of the country is at risk. This is the making of a humanitarian disaster.

This crisis may never be completely resolved in our lifetime. Relations between India and Nepal have been tense for many years and  the governments lackadaisical approach to resolutions is their worst enemy. The impact of this crisis will have a harsh impact on what remains of a fragile Nepal if fuel doesn't start to flow with adequate amounts, not just trickles.

We believe India knows fine well that China can't supply Nepal's fuel needs efficiently, the costs to Nepal to fly fuel to Kathmandu would be astronomical - but never say never when it comes to China. The trade route between Tibet and Nepal (The Friendship Highway) was in bad shape well before the earth quake, this road is not suitable for fuel trucks. It's a very difficult canyon highway that has been sliding significantly the past 3 years. China announced they had no interest in repairing the highway this year post quake and have now made a narrow attempt for passage for goods.

Last year a slide on this road created a dam making a dangerous lake upstream. Miraculously the earth split just enough one night to release trapped water slowly taking a piece of heavy equipment with it sparing thousands of lives below had it blown open all at once. Our first slide experience here was in 1991 while making our way to Everest on the north side, Tibet. The road runs along side the class 5 Sun Koshi river. Equipment is stationed on this road all year to open slides. It's one of the worlds most dangerous highways. Yes! as seen on TV.

The fuel crisis news seems to be quiet right now because Dashian festival preparations are underway. This is the biggest festival in Nepal, like our Christmas, it's a 2 week celebration. Nepal desperately needs some happy time but many fear the blockade issues will heat up again after the festival. Many people return to their mountain villages for the festival by bus. This may not be an option this year and may create even more tension between the countries.

China day before yesterday opened the Friendship Highway marginally, to get their firecrackers, decorations, celebration treats , relief goods, and so on into the country for the festival, no fuel has been transported via this route at the time of this post.

Dozens of flights to Kathmandu have been affected in recent weeks killing NGO rebuild volunteer projects, and now including ours. China South and Eastern originally halted ticketing first till October 10th to Nepal. Yesterday they started cancelling November flights, this has affected our earth bag build team project volunteers. To us this 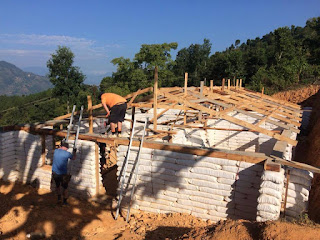 means there is anticipation that this crisis will continue well after the Dashian festival.

On that note, we are extremely saddened to report that our Peak Freaks Earth Bag school project is postponed till next year. Durga Aran, project director has been on the ground since September and has successfully completely the first project (minus the mudding) on one of three projects before the crisis. He reports they are at a standstill waiting for fuel to get supplies in to continue with the other projects. He finished the initial construction phase of project #1 seen in the adjacent photos, however he is now unable to get earth movers and supplies in for our November project. Durga thinks that even if the fuel did start to flow right now, it will be many weeks before it reaches areas outside Kathmandu.

We've been watching other projects plans like ours fall like dominos since the fuel crisis. Sad sad day for us here at Peak Freaks to have to make this announcement to Nepal and our volunteers.

Tim will still be climbing in Nepal with his teams and checking in on friends to learn of the situation in the Khumbu.

Nepalese people are incredibly resilient, if anyone can survive this crisis, they will, and we will applaud them.

THROWING BRICKS INTO A SINKING SHIP

It's a crying shame that the new constitutions debacle comes at the worst possible time ever for Nepal.  Ourselves joined with First Steps Himalaya have put all our energy towards helping a district that lost 97% of their homes, 3440 people were killed and 3000 were declared missing.  Now getting supplies for basic needs, food and rebuilding supplies is near impossible due to the current border blockade on the India/Nepal border that has halted fuel deliveries to Nepal for going on two weeks now.  FSH friends from New Zealand, Court Construction has just arrived in Nepal to work on the roof of their first project - however Durga reports getting supplies right now is near impossible.

This isn’t the only blockade the country has experienced post quake. When foreign aid arrived in May - donated goods were left on the runway till import taxes were paid by agencies and donors. Sadly a lot of these goods never got to the people in time to be used.  Photos came out of Kathmandu showing cargo crates at the airport left for birds and thieves to rip apart. Finally, when villagers received rice it had been spoiled.

The earth quake happened at the onset of the monsoon season. People in the hills fled to Kathmandu afraid of landslides that would most likely happen closing roads and potentially wipe out more villages. If these slides happened (and they did) people wouldn’t be able to help.  Because of this imminent threat villagers didn't get their crops in in time for the planting season because they were living in a tent city in Kathmandu and/or their seeds were spoiled. Young girls were at risk of human trafficking in the city and eventually most went back to their villages. Trucks began delivering sheets of tin to provide temporary shelter throughout the monsoon season and tried to plant.

At the time of this blog the monsoons is slowly coming to an end and winter is starting to to set in.
We were concerned people will pick up their bricks and build with them again in this earth quake prone country and we wanted to help offer something safer. Durga Aran, Co-director of FSH organized a summit meet in Kathmandu to teach the concept of earth bag building. It was well received with 70 people turning out for the event.

We just recently hitched up with someone who went into the Langtang region to do a recognizance of the situation there. It was our intent to bring a couple villagers from here to join us on our earth build school building in Sangachok, and to take these skills back with them to their village. Sadly this plan fell apart. It was discovered that the villagers are content to live in their shanty tin dwellings as there is a much more serious problem at hand…THEY NEED FOOD!! They declined any building aid and materials and instead are pleading for money for food. This is getting serious!

Keep in mind that the tin shanty style housing currently being used is what you see in the news and in photos of places like Haiti and Mexico where winters are warm, that is not the case here in the Himalayas. It’s looking very grim at this point.  Oh! and did I say that the Nepal government has failed to use the 1.4 billion dollars of foreign aid money?

There are a lot of headlines online right now on the strikes aka bandhas  affecting the countries current state, here’s one:  http://www.tribuneindia.com/news/world/nepal-looks-for-alternate-fuel-supplies-as-crisis-deepens/143326.html

In short;  the border between India and Nepal is a war zone; 40 people have been killed over the border closure stopping fuel coming from India in protest of the constitution; Nepal is landlocked and depends 100% on fuel and other goods from either India or China; the Friendship Highway, the trade route between Nepal and China was destroyed by the earth quake and China is not interested in repairing it till next year; Nepal is at the mercy of the Indian fuel but it’s not really the Indians that are stopping the flow. The blockade is on the Nepal side, It’s the Madhesi people who inhabit the border Terai region.

Madhesi people, have felt neglected by successive Nepalese governments over education, health access, economic activities and development programmes. Many of the poorest communities survive on less than US$1 a day.

The Madhesi leaders accuse the Nepalese government of treating them as outsiders and not as part of the Nepal due to their Indian roots. They are Nepalese nations with birth ties to India and who want changes to the new constitution and are compromising security at the border. This is what India says. Meanwhile Nepal headlines blame India for the blockade. Either way this is yet again another way using fuel as leverage.

How are we affected?

Nepal desperately needs food and building supplies to rebuild and all while in the midst of their main festival season and peak tourist season there is a blockade that streams the much needed fuel. We made pleas to the world post quake to please bring your tourism dollars this autumn to help revive the country by putting people back to work. Now airlines like China East and South are cancelling flights out of the US and Canada to Kathmandu. It’s getting complicated with China’s border on one side and India the other. Why are they cancelling flights when they could operate here with enough fuel to get in and out like other airlines have been doing?  We suspect its a political and getting confusing to say the least.

Nepal has decided to throw rocks into a sinking ship. The cost of climbing trekking peaks has just gone up considerably. These new increases have been dickered with at the worst possible time. Here’s the new increases explained:

Many climbers and peak trekkers may not have any knowledge of this before going to Nepal this autumn and will have to come up with extra cash or lose out on their climb. Our fear is this will lead to more tourism corruption on the streets and in the valley’s in the name of climbing.  Climbers  should be aware of the consequences trying to do things through the backdoor. This can mean loss of life, inadequate leadership and infrastructure, being liable to a guides family for life should something go wrong, or even jail.

Working in Nepal has never been easy. In all our years here, something always goes down; be it weather, virus epidemics, or politics.  The next couple of seasons are definitely going to have considerable challenges if the situation with the border doesn’t improve and people don’t get food and shelter.

We’ll be watching closely how this all plays out in the next week. We’ve got climbers, trekkers and a very ambitious earth build team gearing up to go help build a earth bag school.